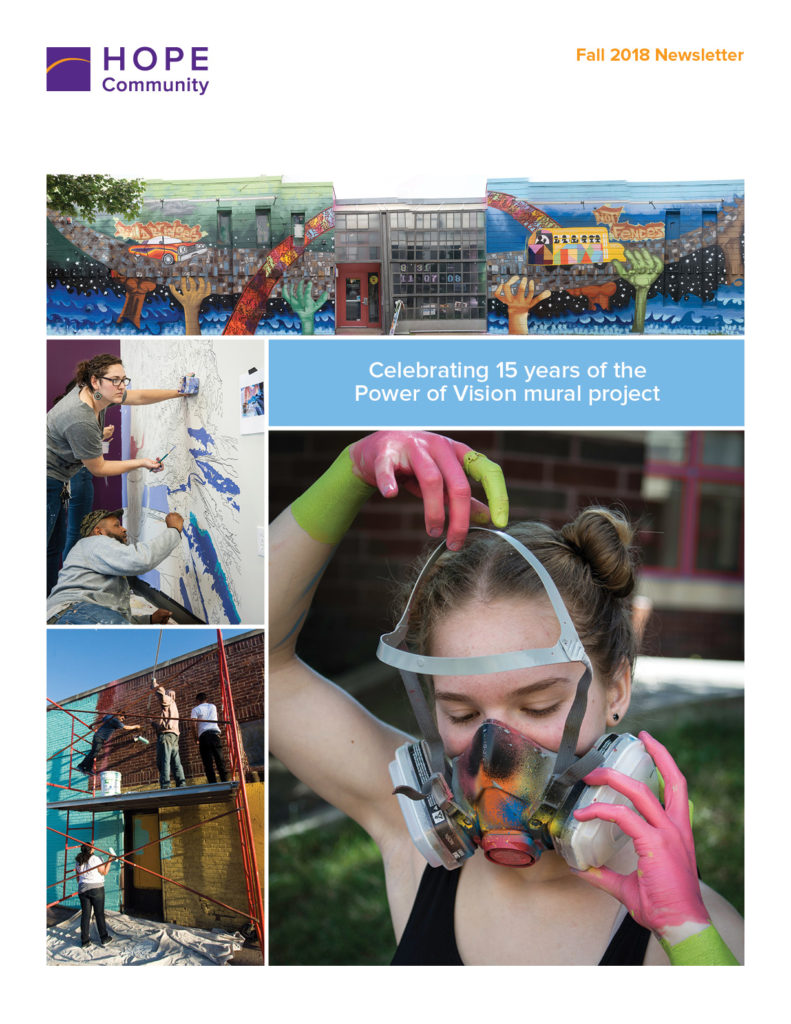 Celebrating 15 years of the Power of Vision mural project

For more than a decade, art has been an important community building tool
in Hope’s place keeping and leadership development work. Within our Art,
Policy, and Power program, the Power of Vision (POV) mural project (est.
2004) has been a space for youth and adults to create murals that reflect
community, convey understanding and embody hope. The POV project
allows local emerging artists in our community to learn from mentors and
create public art reflective of their own vision of their community, while
building art skills, leadership, and relationships.

As Hope’s mission expands and our next chapter unfolds, the history of creating
Power Spaces remains a part of our core. POV exemplifies this by creating a
space for youth to explore arts in a new way—knowing they are at the center
and that their voices will be driving the narrative of the final mural—visible in
their own city. The POV project, like all our work, is part of our overall
strategy of Place Keeping—a development and engagement approach that
recognizes, amplifies, and leverages the stories, practices, and collective
assets already found within the neighborhood and the community.

We are grateful for your belief in, and generous support of our work. 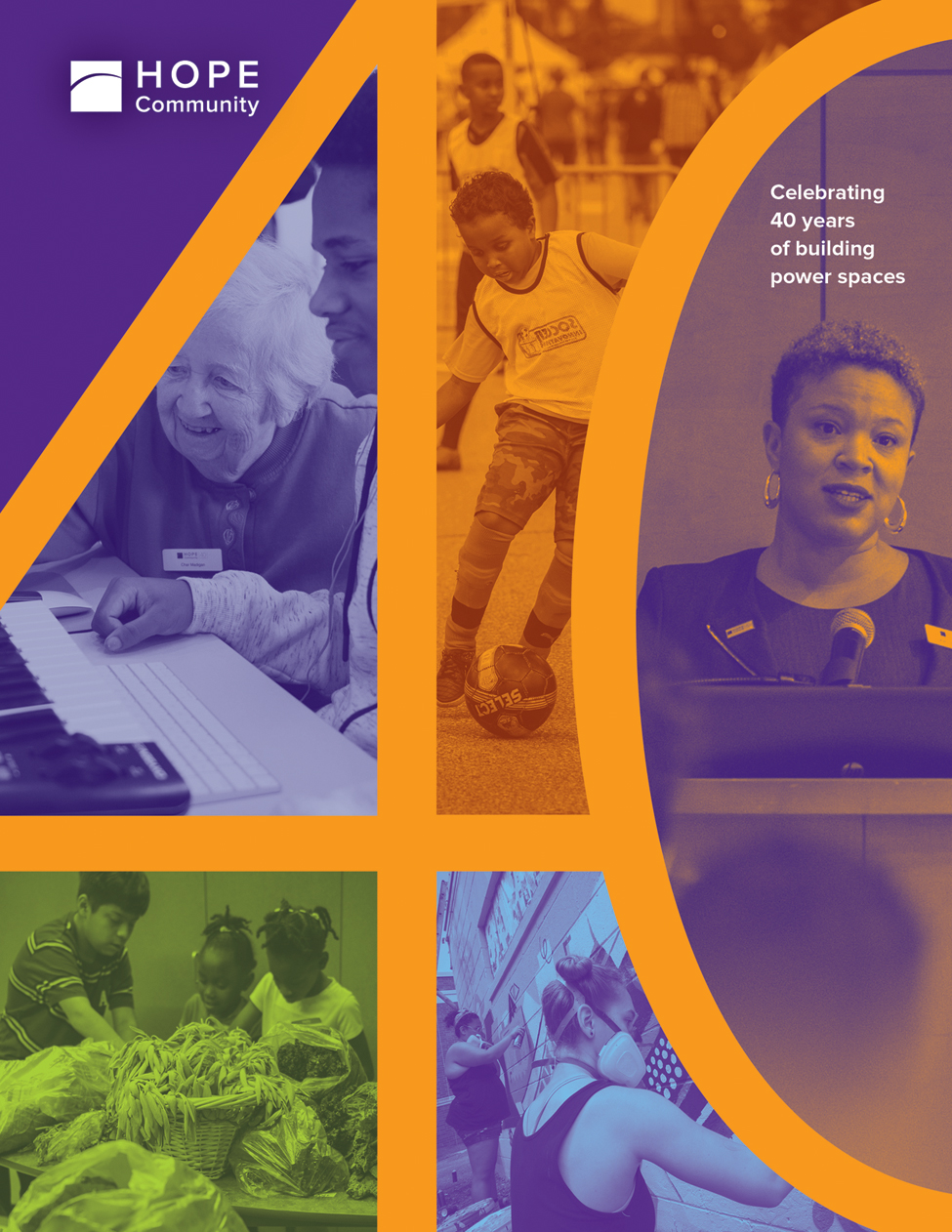 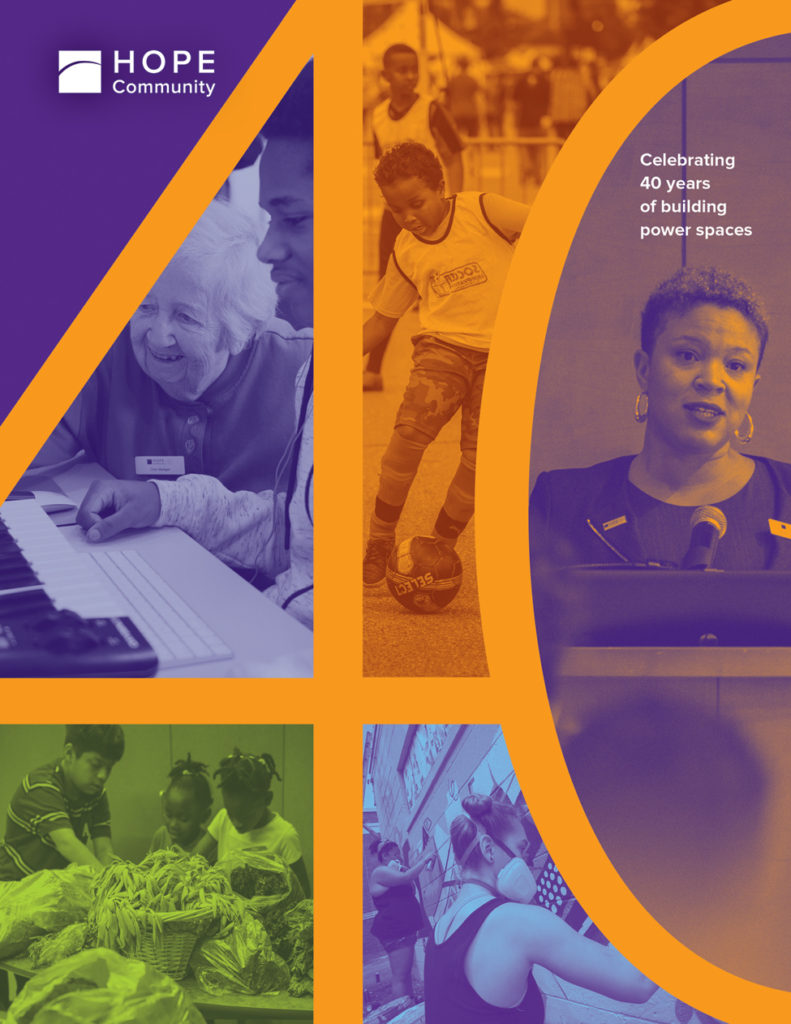 Our 2017 Annual Report celebrates our 40 years of building power spaces, while highlighting what we have done and what we’ve learned about our work over time: it’s not what we do that makes us successful, it’s how we do it.

Click here to read or print our 2017 Annual Report

Thank you to our community of supporters. Together, we are building a stronger community, city & future.

Eager to share Hope with your friends? Watch our video and share it with those you care about. Donate or become a monthly Sustainer today! 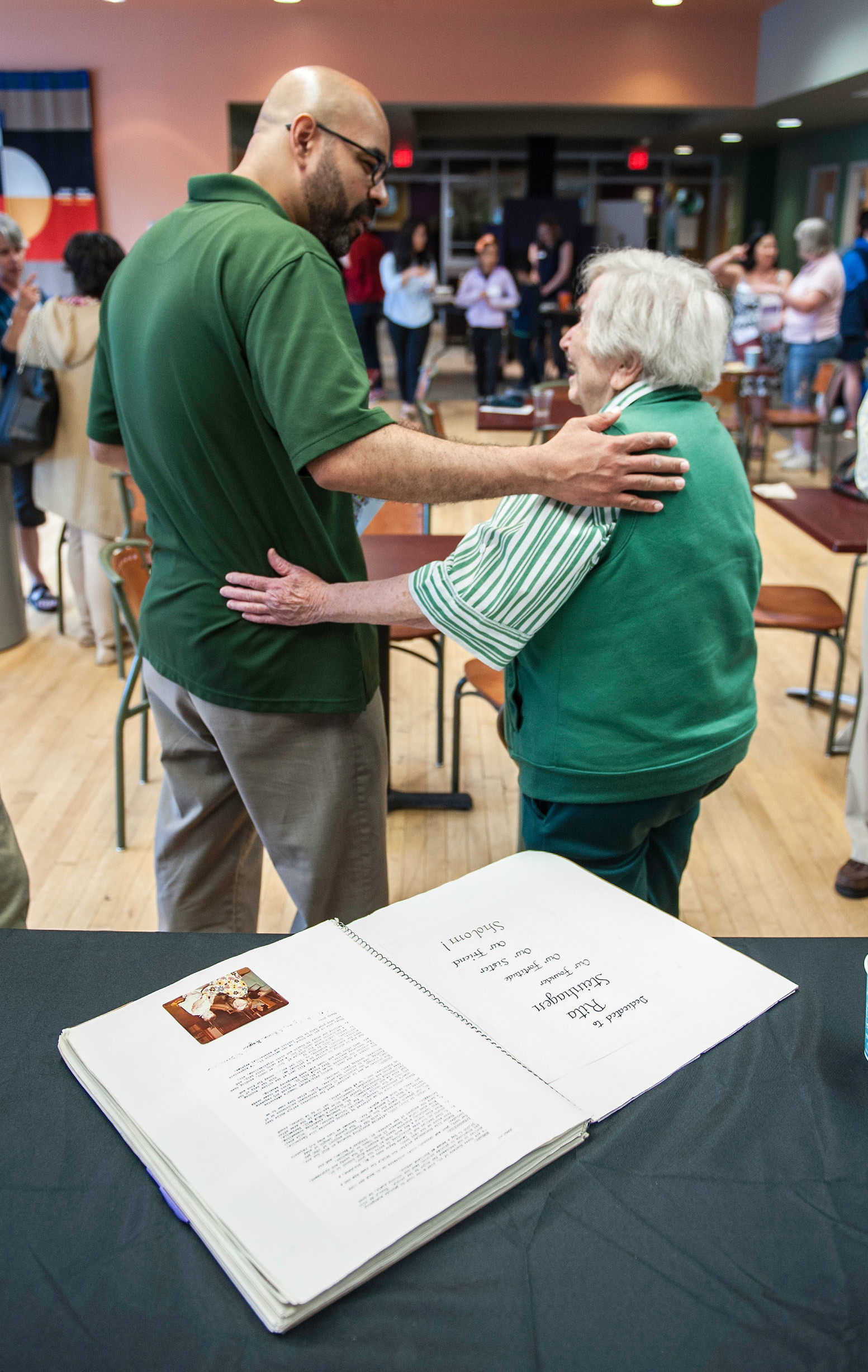 Here’s to Another 40 Years of Hope!

The Staff and Board of Hope Community are so appreciative to all who joined us on Saturday, May 19th, for our final 40th Anniversary Event!

Joined by over 150 of our community of residents, program participants, funders, donors and partners, we explored Hope’s Campus, connected with some of the many people who have shaped Hope over the last 40 years, and built new relationships as we enter a new era.

During our 40th Anniversary Open House, we were honored to unveil our newest video in our #40Stories of Hope Campaign. This story embodies the legacy of Hope & our commitment to our community. If you missed the program, or just want to see the wonderful video again, you can find it below! A very special thank you to our friends at Line Break Media for producing this powerful piece. 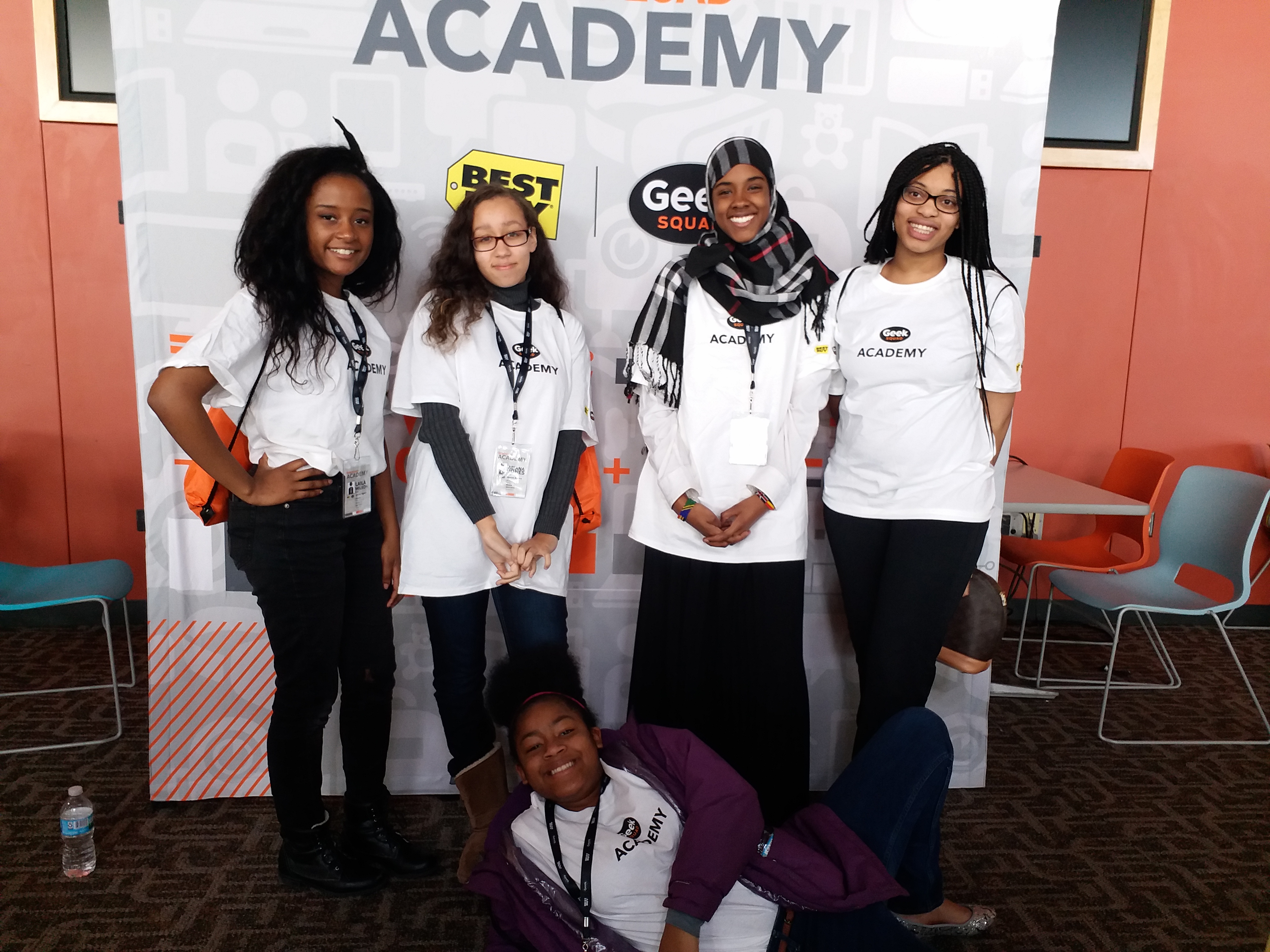 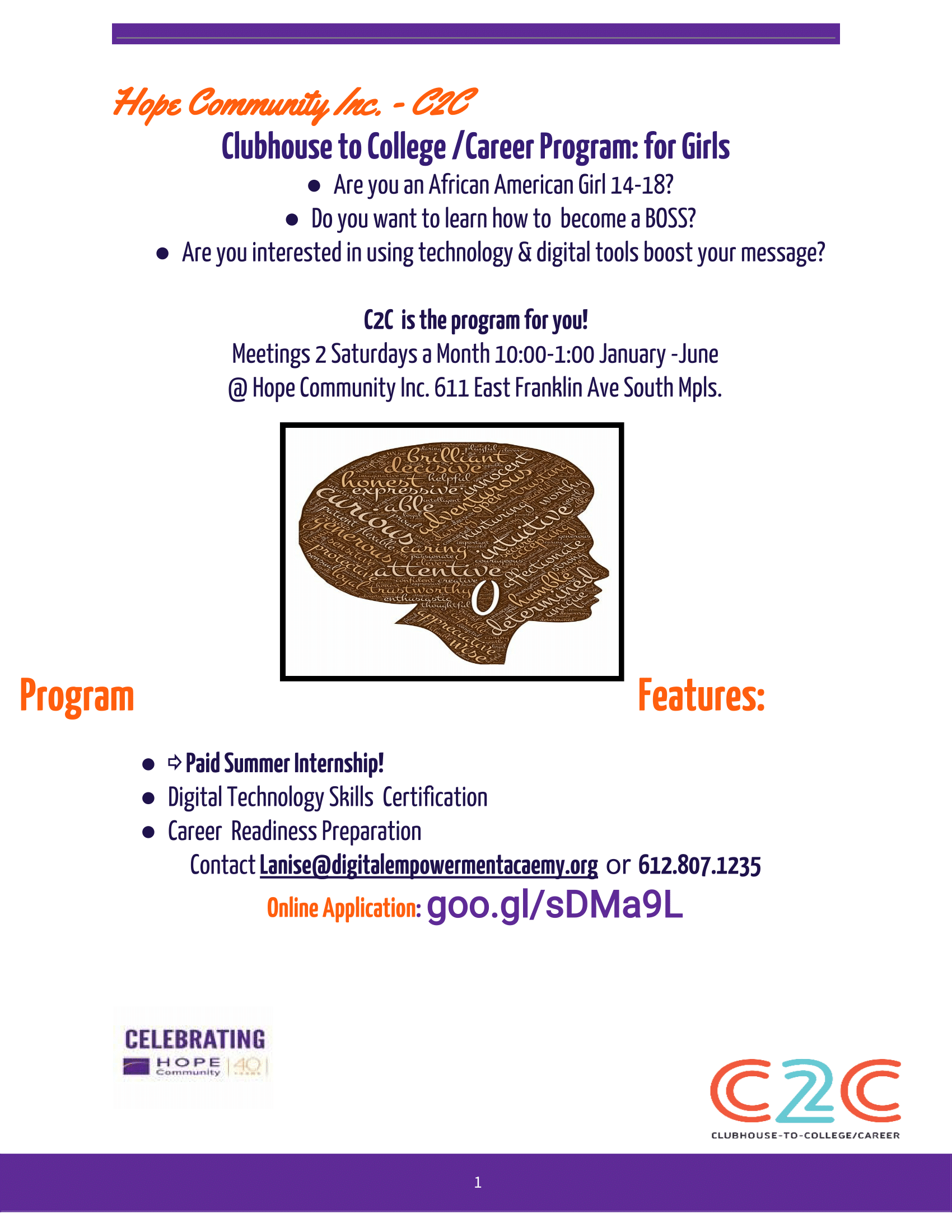 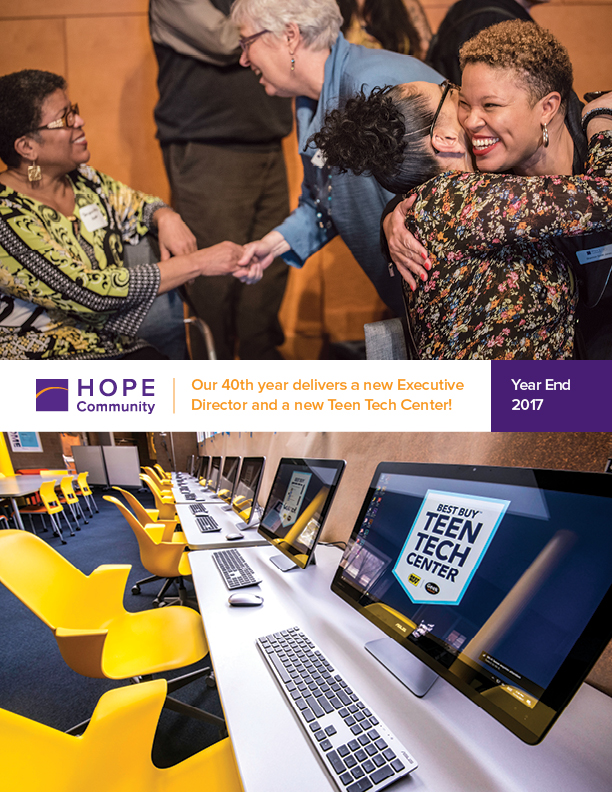 As 2017 comes to a close, we are so grateful for all that you have helped us accomplish here at Hope. Please enjoy our 2017 Year End Newsletter!

Our warmest wishes to you and yours as we celebrate this new year together. From all of us at Hope, 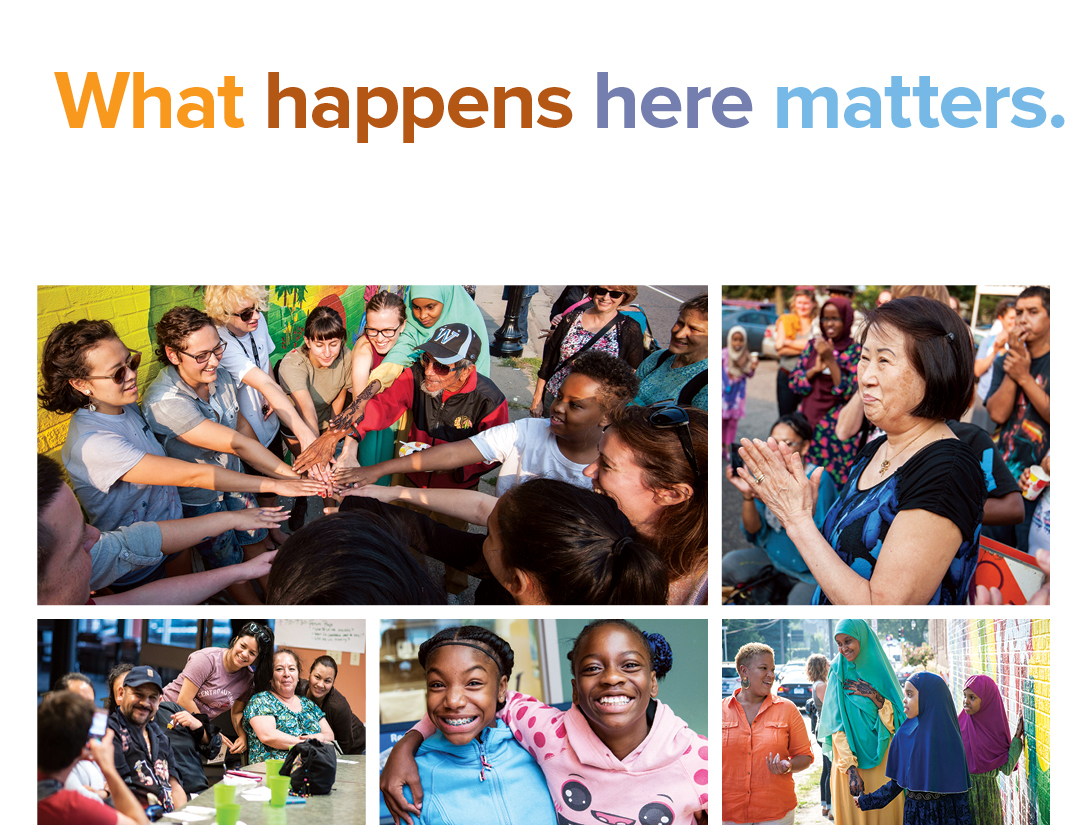 Our Fall 2017 Newsletter is Here 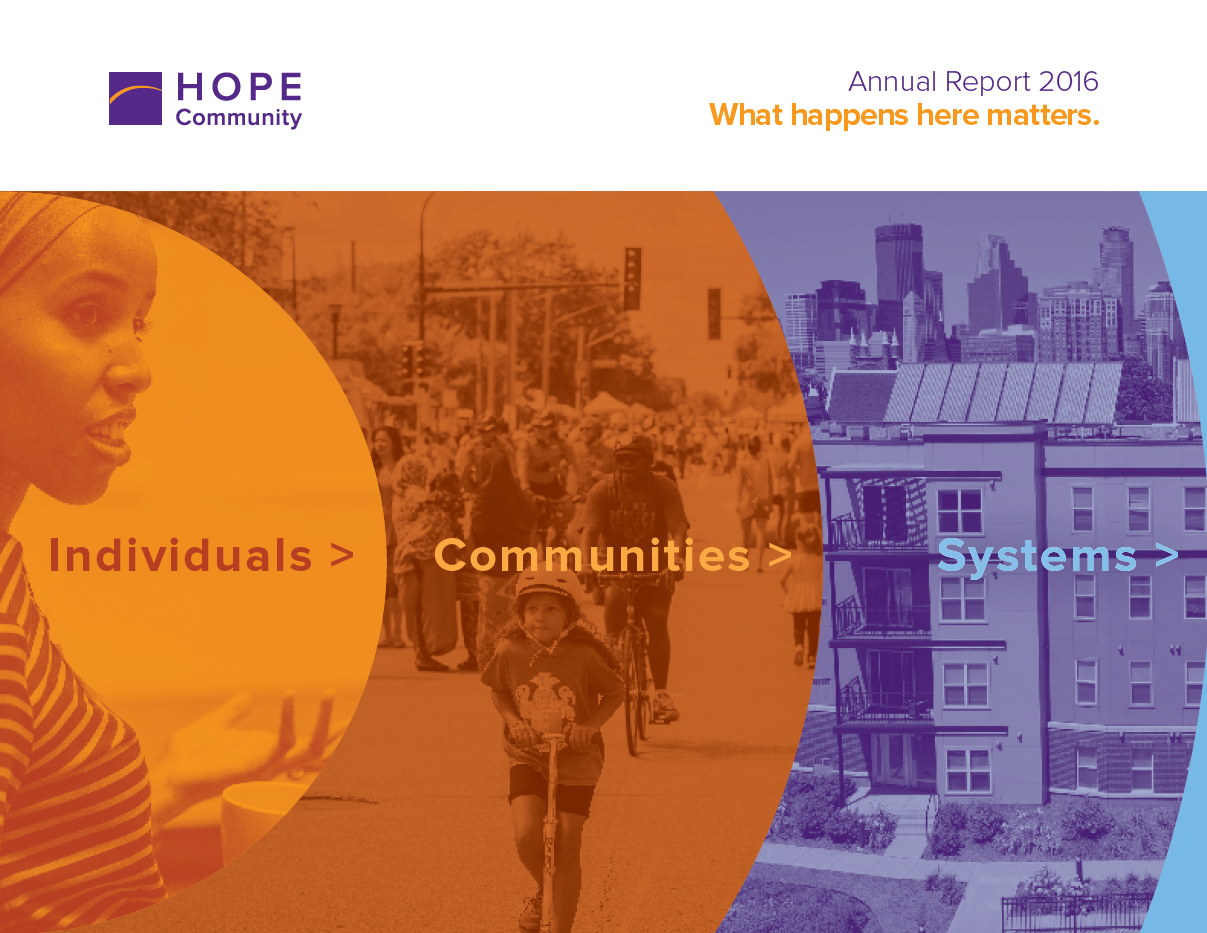 Our 2016 Annual Report is Here

Our 2016 Annual Report lifts up what we have done and what we have learned about our work over time: it’s not what we do that makes us successful, it’s how we do it.

Thank you to our community of supporters. Together, we are building a stronger city.

Click here to read or print our 2016 Annual Report

Eager to share Hope with your friends? Watch our video and share it with those you care about. Donate or become a monthly sustainer today! 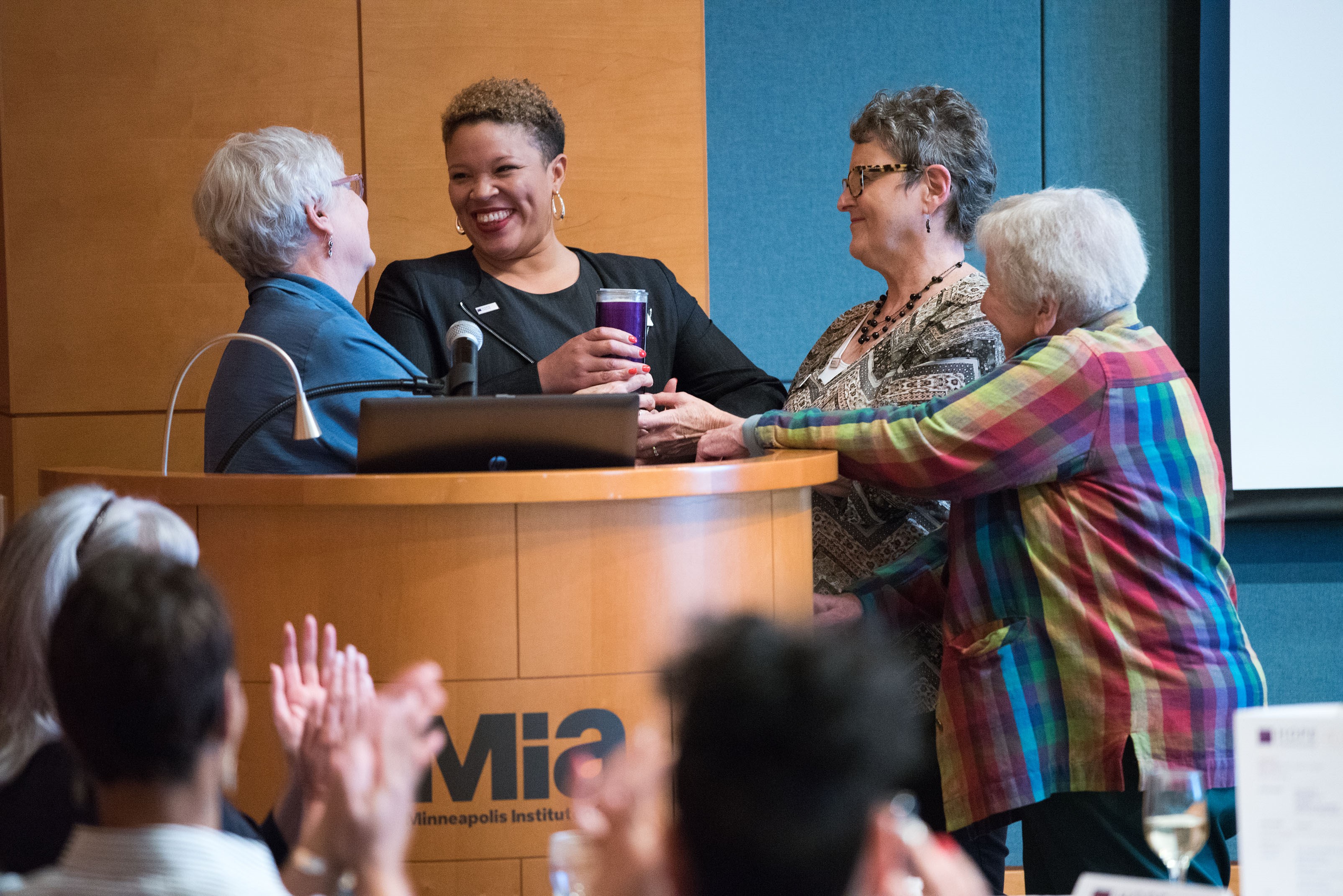 If you had pictures taken at the “Share Your Hope Story” photo booth, you may view and download them here!

Wow – what a night. The Staff and Board of Hope Community are so appreciate to all of you who joined us last Thursday evening for our big celebration. Joined by over 250 of our friends and supporters, we shared stories, connected with some of the many people who have shaped Hope over the last 40 years, and built new relationships as we enter a new era.

There was a lot to celebrate:

We were honored to have all four of our Executive Directors share the stage and also their reflections on the legacy of the organization in our new video. If you missed the program, or just want to see the wonderful video again, you can find it HERE. A big thank you to our friends at Line Break Media for producing this video.

Also, if you shared your Hope story with us through the photo booth, please check out the link to the photos at the top of this post.

As a reminder, we’ll have more to share between now and next March about the 40th Anniversary year, so be on the lookout. But our dear Char Madigan perhaps best summed up the organization’s history in the video when she said:

“We moved from charity to justice, from guests to leaders, and from crisis management to focused community development.”

Thanks again for being part of Hope Community! 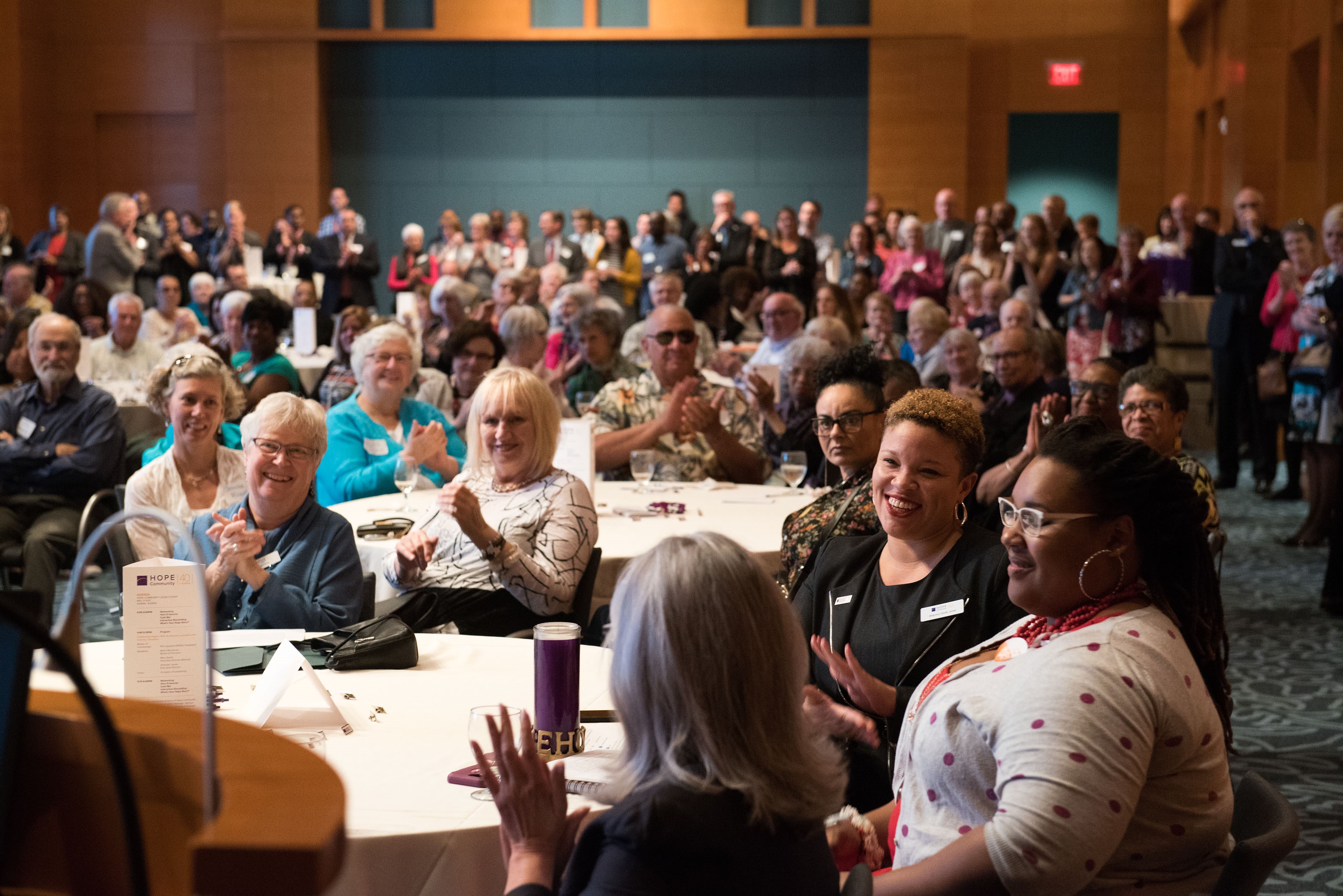 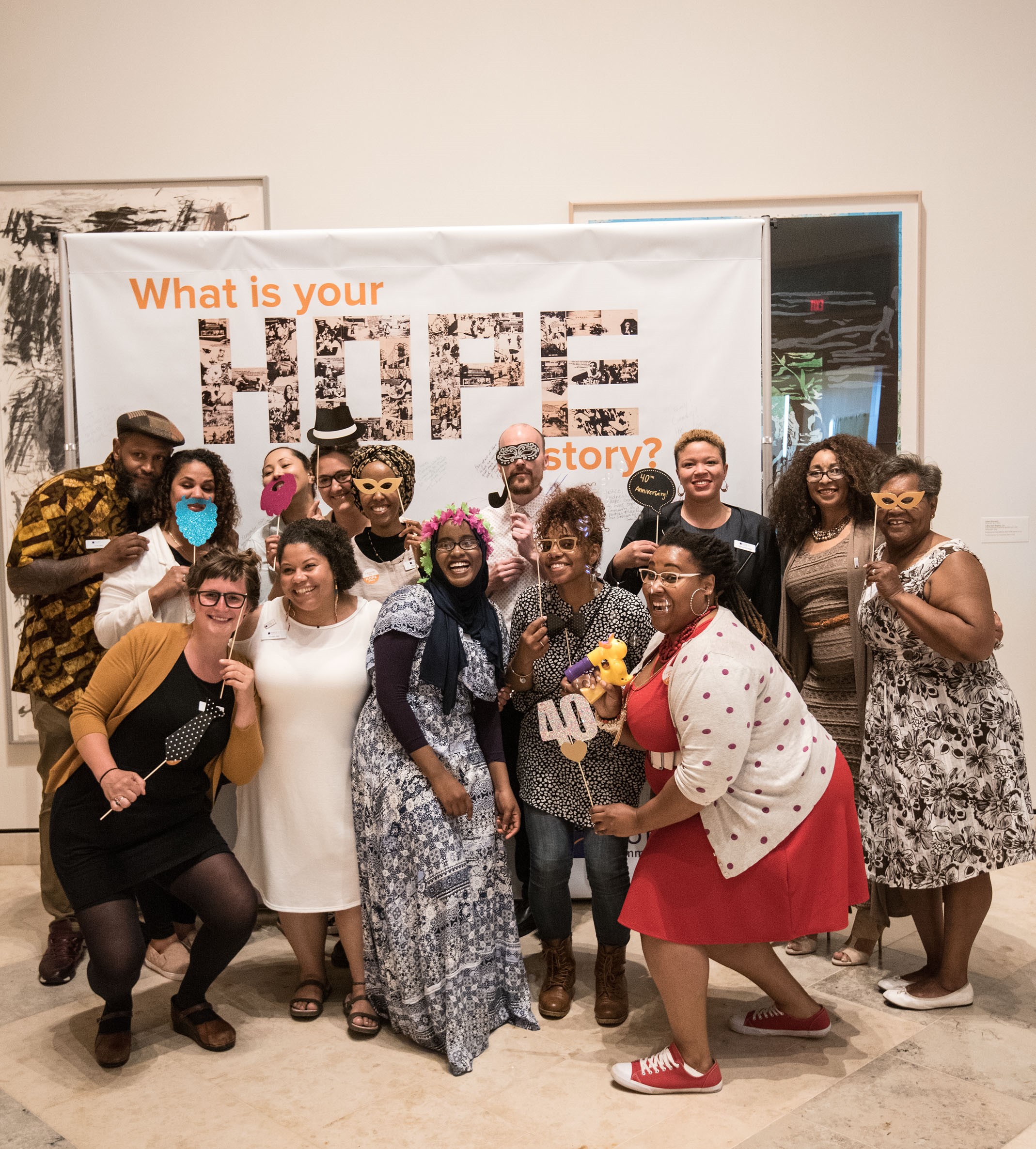 Over the last 40 years, from our beginnings in St. Joseph’s House, your support has helped shape Hope Community into a treasured community asset.

Hope’s Board and Staff invite you to share in our excitement as we celebrate the beginning of Hope’s 40th Anniversary year, our remarkable achievement’s during Mary Keefe’s tenure, and our vision for the future as Shannon Jones begins her new role as Hope Community’s executive director.

As an additional way to celebrate the legacy of Hope’s many leaders across the last 40 years, we invite you to contribute to our new Founders’ Fund – a special fund to support Hope’s key initiatives and honor the tenure of Mary Keefe and Hope’s many “founders.” 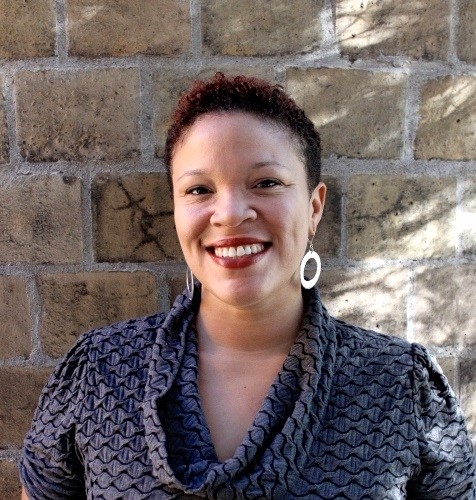 Mary announced her intention to retire last fall, and we wish her well as she moves on to her next adventure. Mary’s last day at Hope will be March 24th. Shannon begins at Hope on March 27, and you will have multiple opportunities to get to know her, including at a special event in May, at which time we’ll also be officially sharing our appreciation with Mary Keefe for her incredible work with Hope over more than 20 years.

Shannon joins Hope after having served as the Director of Community Engagement at Urban Homeworks, a dynamic, resourceful community development organization with headquarters in north Minneapolis. Like Hope Community, Urban Homeworks combines an emphasis on quality affordable housing with a strategic focus on engaging and building an equitable community.

We are so thrilled to welcome Shannon to our community. In some ways, Shannon has spent her entire career preparing for this new role. Though she is a lifelong resident of north Minneapolis, she first got to know Hope as one of the first residents at the Children’s Village Center at Franklin and Portland Avenues when it opened in 2004. She has worked with many Hope Community partners in her career, and in 2015 participated in SPEAC (Sustainable Progress through Engaging Active Citizens), Hope’s intensive year-long community organizing training that is now into its 10th cohort.

Shannon earned her BA in Family Social Services at University of Minnesota, and has completed graduate-level coursework in Leadership and Management at Concordia University in St. Paul. In addition to five years at Urban Homeworks, she brings to Hope an extensive background in civic leadership and professional development. She has previously worked at Hennepin County in Human Services, and at Sabathani Community Center as a case and project manager. Shannon has two sons – Hassan, 17, who attends Henry High School, and Khalil, 16, who attends Downtown Fair School.

Hope’s board decided to hire Shannon following an extensive search process headed by a committee of board members and Hope staff. While they met many qualified candidates, the committee was unified in their recommendation to hire Shannon as the next leader for this dynamic 40 year old organization. Shannon brings Hope the focus on innovative, collaborative leadership and community engagement expertise that will continue and enhance the strong work of Hope as we move into the future.
Sincerely,